The latest and most complex upgrade in our no-dig services is microtunneling. Microtunneling is a technology that describes itself clearly with its name – it is made to drill small tunnels. It is mostly used for pipelines of large diameter (150 – 3800 mm and

more) and also longer lengths that can in some cases exceed a few kilometres. The important distinction between the classical tunnel digging and microtunneling is that the latter still uses remote controlled machines (MTBM – Micro Tunneling Boring Machine) which push the pipe horizontally (pipe jacking).

An example of construction pit for microtunneling made from reinforced concrete to provide resistance to anticipated forces:

Technology is based on remote controlled procedure of boring with MTBM equipment. Entire work process is supervised by the machine operator in the mobile cockpit which is located by the construction pit. Through computer console and precise control equipment the operator receives continuous data about the location and orientation (inclination) of the boring tool as well as data about the hydraulic parts. This way the operator can accurately guide and control all parts of boring with the MTBM equipment directly from his cockpit.

Installed software enables, among other things, to constantly monitor and log (in a log file) of all important parameters. This enables on the spot as well as later analysis of the performed work.

The process of work enables maximum security of the operator who is no in direct contact with the MTBM machine. 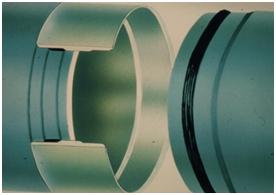 In most cases of microtunneling the pipe is inserted in the construction pit and the MTBM machine pushes it in the bore. This is so called “pipe jacking” system that uses special pipe jacking pipes. These are pipes from various manufacturers which provide resistance to the expected forces as well as the required procedure of joining without the projected coupling parts. It is recommended to use pipe jacking pipes made from polyester, strengthened concrete as well as ceramic jacking pipes which are especially suitable for sewers.

In addition to the “pipe jacking” system with pipe jacking pipes it is also possible to install welded metal pipes of various diameters. For example protective and transport metal pipes and special pre-insulated metal pipes for gas pipelines etc. as seen from the image below (Building a transport gas pipeline with diameter of 810 mm in Zrkovci near Maribor, December 2010).

Diameter of pipes, the length of the section as well as geologic conditions are all a factor in choosing the appropriate MTBM machine and the boring equipment, and most of all the correct process of creating a tunnel as seen below.

The longer the tunnel more friction appears around the installed pipe. We usually use two basic procedures to minimize this friction.

The first method is boring over the original diameter. In this case the diameter of boring is larger than the outside diameter of the installed pipes. This way empty space is created which lowers the friction. This is achieved by the use of special cutting heads which create such effect in stable materials.

The second method is useful mostly in softer terrains, such as gravel, sand etc. We use ecologically acceptable boring silts which are based on a mix of bentonite and water. They are injected into the boring gap. Beside the lubrication the pressure of the injection is what helps to stabilize the bore and prevents it from collapsing.

The amount of friction can be lowered with these two methods, however, it cannot be completely eliminated. Often it is required to provide a few hundred tons of push force to push the pipes into the bore. The force is applied to the pipes as well as to the construction pit therefore it is vitally important to make a quality construction pit.

To bore longer tunnels push stations have to be built in between the tunnel because of the huge amount of friction. They help to push the pipes more effectively during the entire section.

Microtunneling can be performed in all types of soil, from sand, to clay and more compact types of soil, to the hardest rocks. Technology is usable also in cases where other methods are hard or even impossible to use.

A disadvantage of this system is high fixed cost which makes the MTBM technology economically ineffective especially for shorter sections and smaller diameters of pipelines. The cost of preparation work and building a construction pit is relatively high.

The Flash Player and a browser with Javascript support are needed..